Stories Untold is a series of discussions with Newcomer artists, sharing their artistic practice and experiences on living as an artist in Canada. 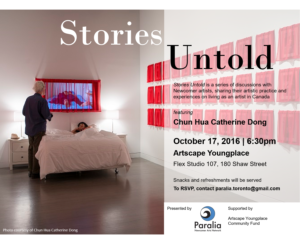 Now living in Montreal, Dong will talk about how she started her career, overcame the challenges of being an immigrant, and found the courage to continue. Don’t miss this opportunity!

She has exhibited her works at Fernando Pradilla Gallery in Madrid (2016), The Schusev State Museum of Architecture in Moscow (2015), Gera Museum in Vrsac (2014), New Art Center in Boston (2014), The Others Art Fair in Turin (2014), Delhi Photo Festival in Delhi (2013), The Aine Art Museum in Tornio (2013), VMU art gallery “101” in Kaunas (2014), Art Museum at University of Toronto in Toronto (2014), Articule in Montreal (2014), and Vancouver Art Gallery in Vancouver (2014). Her video work has been screened in Brazil, Mexico, Finland, Germany, Italy, Ireland, Colombia, Spain, The Netherlands, Finland, Poland, Greece, Romania, Croatia, Denmark, Sweden, Scotland, China, USA, and Canada. Among many other awards and grants, she is the recipient of Franklin Furnace Award for contemporary avant-garde art in New York in 2014. Her performance is featured at Marina Abramovic Institute and listed amongst the ‘‘Top Nine Political Art Projects of 2010’’ by Art and Threat magazine. Dong now lives in Montreal.

Body is political. Working within the gap between body as image and body as experienced reality, Dong uses the body—often her own body— as a visual territory in her work and a primary material to activate social commentary on immigration, race and gender. By encapsulating these global issues in microcosm or magnifying personal predicaments until they become universally visible, she presents the body as an embodiment of dynamic human relations, locating herself at the nexus of author, artwork and audience.

Her artistic practice is based in performance art, photography and video, in which she explores themes of “East/West” and “self/other” within the contemporary context of global feminism. Her work deals mainly with cultural intersections created by globalization and asks what it means to be a citizen of the world today. She opens dialogues about “deterritorialization” and “disessentialization” in culture and how to transform socio-political landscapes through gestures. The gestures in her work are symbolic and metaphoric—at times subversive, meditative, subtle and/or humorous. They express her desire to transform everyday political life into art, as she strives to instill a model for social transformation. In her earlier works, the body represented an ideological confrontation or political alienation. She developed the idea of representation as a political tool to give visibility to those made invisible by dominant ideologies. In her newer works, she views the body as a bridge connecting East and West, past and present, creating a new version of hybridity and striving to transcend and mend.

Paralia, in partnership with East End Arts and Children’s Peace Theatre, presents the event “Stories Untold” which will feature two experienced artists who will share their stories and challenges while trying to establish as an artist in Canada. These artists will also have the opportunity to introduce their works.

Come meet Toronto’s local artists from all over the world! The event will be followed by an hour mix and mingle over hot cocoa, coee, and snacks. Take the opportunity to ask as many questions as you want and do some networking. 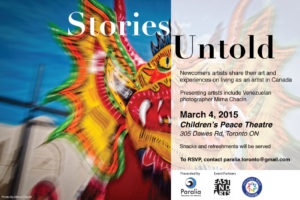 The Venezuelan artist Mirna Chacín will be one of the artists featured in this event. Mirna discovered her passion for photography as a means of artistic expression when she was an architecture student. In 1988, her debut in Fine Arts earned her the rst prize in photography in the Visual Arts Biennale of Maracaibo, Venezuela. After many solo exhibitions, she has recently participated in collective art exhibitions all over the world. Shortly before immigrating to Canada in 2011, Universidad del Zulia (LUZ) awarded Mirna The Francisco Hung Bracho Medal for her artistic achievements in Venezuela. She is currently, working to develop her new media art project: Dancing with the Devils and on the curatorial phase of the series: Children of Dawn and Toronto Summer Daydreams. Mirna lives in Toronto and is an active member of The Neighbourhood Arts Network and G44 Center for the Contemporary Photography. 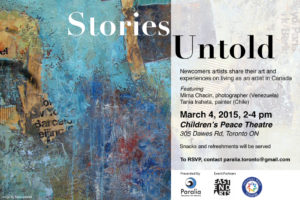 Tania Iraheta  is a Chilean visual artist and arts teacher who has been practicing art for about fteen years. Although she has been more focused on teaching, Tania has been part of many collective exhibitions since 2004. She holds a diploma in Graphic Design from George Brown College.

In 2010 she was awarded an Access and Career Development Grant by the Ontario ArtsCouncil which allowed her to attend the Toronto School of Art but she is mainly self taught. She is the art instructor for Pinceles Latinos which is an art studio located in North York. Pinceles Latinos (Latin Brushes) oers visual arts workshops for the Latin American community as part of Casa Maiz Cultural Centre. Through these workshops that Tania conducts during each year at Casa Maiz as well as other organizations, she has been able to demonstrate her tremendous desire to have a positive eect on the lives of people in the community.

Paralia supports and promotes newcomer artists as well as encourages their self-sustainability by providing them with the skills and resources needed in order to establish an artistic presence in Canada.