Join us for the first installment of our part four part series, which will bring a total of 20 award winning professional Toronto based artists to facilitate workshops for newcomer artists. These artists will represent the following disciplines: Music, Literary, Visual Arts, Media Arts, Theatre and Dance

Each workshop will be formatted as a 3 hour round table session  facilitated by 5 multi-disciplinary artists. This session will invite arts leaders to facilitate a workshop on the nuts and bolts of being a practicing artist in Toronto. This event will give access to newcomers to connect with gallery directors, performing arts presenters and curators in order to better acquaint them to arts sector in Toronto.

This series will give access to newcomer artists to connect with the gatekeeper of the Toronto arts sector, an opportunity to increase their capacity and understand how navigate the arts in Toronto.

Here are a few art leaders that will be joining us for coffee and tea:

Food will be provided!

Two weeks ago Paralia Newcomer Arts Network hosted the first event of the “Stories Untold” series where we had the opportunity to meet and listen to two newcomer artists in Toronto: Mirna Chacín and Tania Iraheta. Thank you East End Arts and Children’s Peace Theatre for making it happen!

Not only did Mirna and Tania do a fantastic job talking about their work, but they also presented some of the challenges they faced in order to establish as an artist in Canada. See below the tweets we live-tweeted during the event.

Make sure you don’t miss next one!

Paralia, in partnership with East End Arts and Children’s Peace Theatre, presents the event “Stories Untold” which will feature two experienced artists who will share their stories and challenges while trying to establish as an artist in Canada. These artists will also have the opportunity to introduce their works.

Come meet Toronto’s local artists from all over the world! The event will be followed by an hour mix and mingle over hot cocoa, coffee, and snacks. Take the opportunity to ask as many questions as you want and do some networking.

Featured Artists
Mirna Chacín
The Venezuelan artist Mirna Chacín will be one of the artists featured in this event. Mirna discovered her passion for photography as a means of artistic expression when she was an architecture student. In 1988, her debut in Fine Arts earned her the first prize in photography in the Visual Arts Biennale of Maracaibo, Venezuela. After many solo exhibitions, she has recently participated in collective art exhibitions all over the world.

Shortly before immigrating to Canada in 2011, Universidad del Zulia (LUZ) awarded Mirna The Francisco Hung Bracho Medal for her artistic achievements in Venezuela.

She is currently, working to develop her new media art project: Dancing with the Devils and on the curatorial phase of the series: Children of Dawn and Toronto Summer Daydreams. Mirna lives in Toronto and is an active member of The Neighbourhood Arts Network and G44 Center for the Contemporary Photography.

Tania Iraheta
Tania Iraheta is a Chilean visual artist and arts teacher who has been practicing art for about fifteen years. Although she has been more focused on teaching, Tania has been part of many collective exhibitions since 2004. She holds a diploma in Graphic Design from George Brown College.

In 2010 she was awarded an Access and Career Development Grant by the Ontario ArtsCouncil which allowed her to attend the Toronto School of Art but she is mainly self taught. She is the art instructor for Pinceles Latinos which is an art studio located in North York. Pinceles Latinos (Latin Brushes) offers visual arts workshops for the Latin American community as part of Casa Maiz Cultural Centre. Through these workshops that Tania conducts during each year at Casa Maiz as well as other organizations, she has been able to demonstrate her tremendous desire to have a positive effect on the lives of people in the community.

Wednesday March 4, 2015, 2-4pm
At Children’s Peace Theatre, 305 Dawes Road, Toronto
How can you get here? Take the 23 bus at Main Street Subway Station and get off at the “Park Vista ” stop. Walk into the park and follow the path for a couple of minutes. 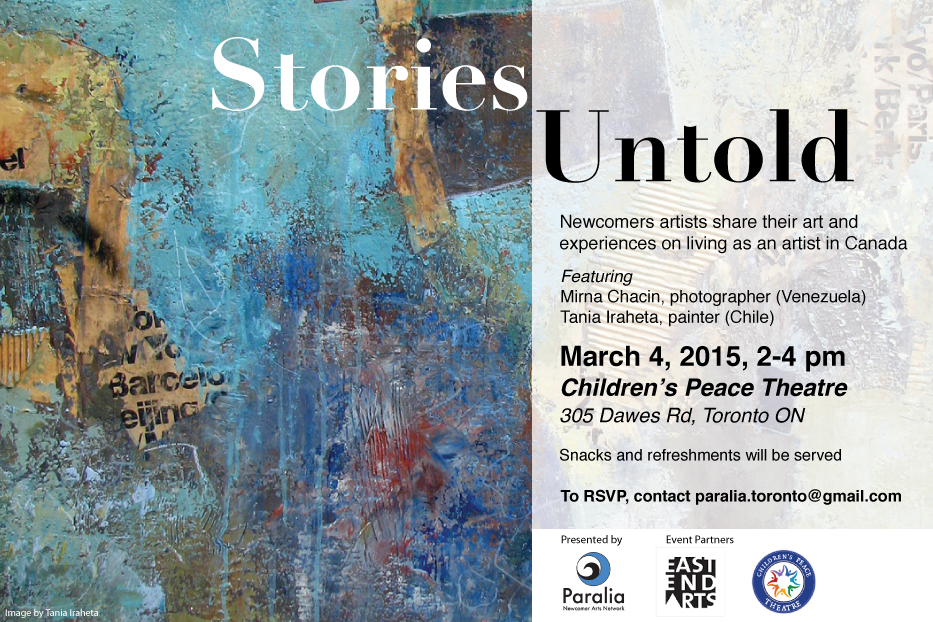 In the heart of the downtown core, Yonge Dundas Square proudly presents the 2nd Toronto Japanese Summer Festival, a celebration of Japanese culture, music, art, fashion and food. The festival is open to the public and free for everyone.

Other than the bright bright sun and smokey meat accompaying huge lineupS, I spotted a Yamato-e style living painting section at the corner of the square. The artists are associated with Japantown Mural Project. (check out their works!)

Apparently (although it’s obvious enough for torontonian) Japanese didn’t have their present in the downtown cord unlike some areas are named based on the local culture and population census ( China Town, Korean Town or Little Italy), and they could like to be invited by to this busy urban life. Surrounded by loud music and people conversation, the facilitator didn’t deliver the speech completely.

Whether they would nd a place called community is a story of another time. Their objective are most heartwarming:

Next time you bus pass a smiling sushi mural, smile back. 🙂 -Jialing

Turtle House Art/Play Centre’s Mission:
is a unique art-based organization in Toronto, designed primarily for children and families from refugee backgrounds to explore their creativity, play, express themselves and make meaningful connections.

They are hosting a summer art market to showcase and celebrate newcomer artists and artisans from regions of conict featuring paintings, carving jewellery and more.

Paralia supports and promotes newcomer artists as well as encourages their self-sustainability by providing them with the skills and resources needed in order to establish an artistic presence in Canada.